As an artist who recognizes that "Every Verse Counts", digital distribution has become a must in order to reach all your potential fans. Verseone distribution grows your visibility. It gets your music into as many ears as possible. And it helps you get paid for your music. LET US HELP YOU COLLECT ALL WHAT YOU ARE DUE! 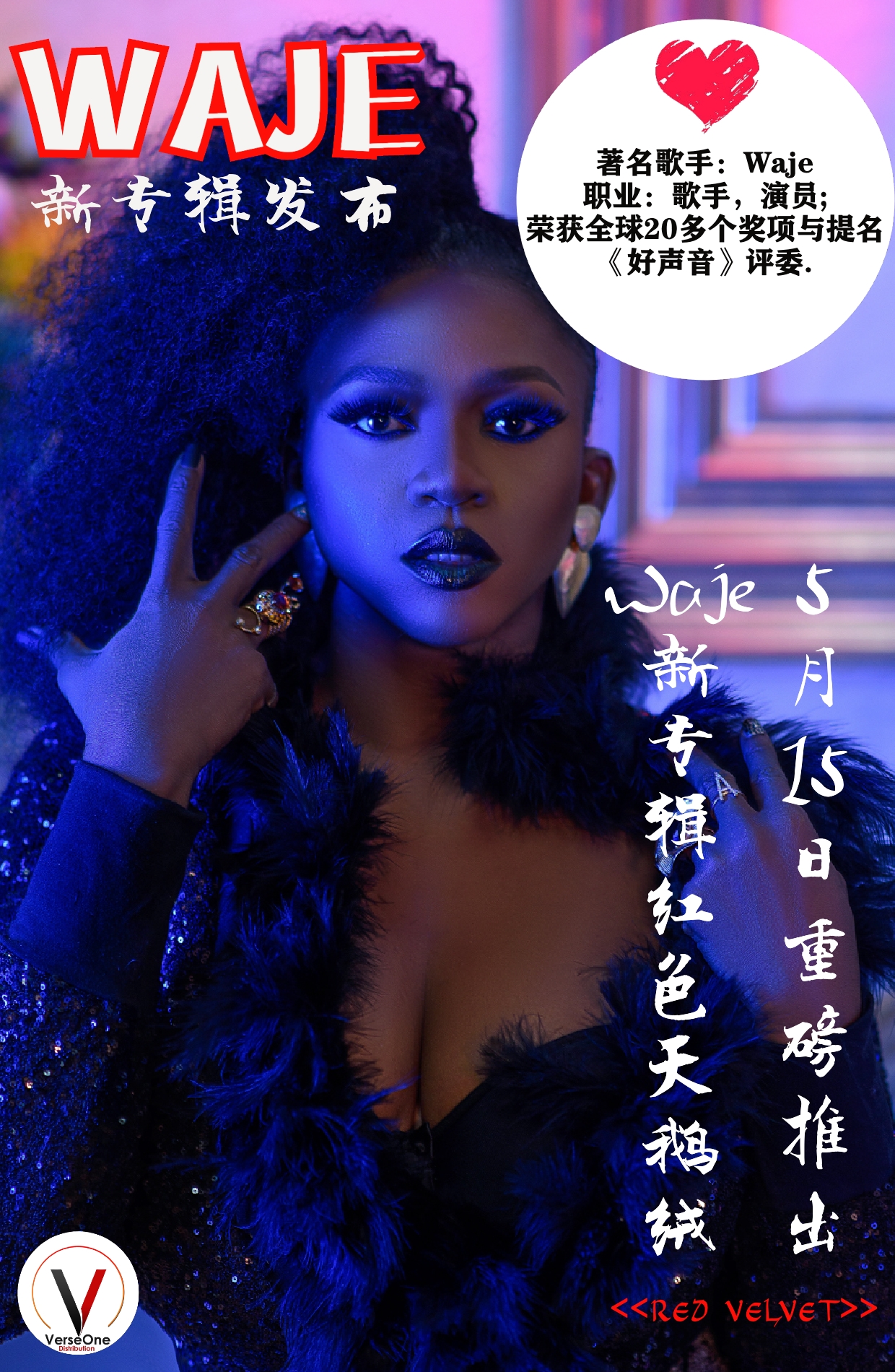 Waje a Nigerian multi-award winning singer is scheduled to officially release her Album titled “Red Velvet” in Asia. Waje is signed to VerseOne Distribution’s GoAsia Project. Waje is one of Africa’s most respected female musicians With a vocal range spanning 3 octaves. Waje has received over 20 awards and nominations worldwide including a Channel O Music Award, 4 World Music Award nominations in 2014 alongside Femi Kuti, Katy Perry, Taylor Swift and others.

Waje was born in Akure, Ondo State in Nigeria but grew up in Benin City, Edo State. She was the first child and the first daughter in her family. As a teenager, she sang in the choir of the Word of Faith Group of Schools where she impressed of its founder Archbishop Benson Idahosa who proceeded to give the talented young girl a scholarship throughout her secondary school. She attended the University of Nigeria, Nsukka where she took part in school concerts and fellowships. Drawing inspiration from the works of Aretha Franklin and Whitney Houston, Waje honed her music skills in school and was soon a popular performer in the state. She participated in MTV South Africa’s Advanced Warning (a reality TV show which featured artists that are on the verge of a breakthrough) where she came out as the first runner up. By the time she released her single ‘For A Minute’, Waje had cemented her position as one of Nigeria’s biggest acts to watch. Since then, she has gone on to release her debut album and has enjoyed both critical and commercial acclaim as one of Africa’s most respected musicians.
Reverently called ‘The Voice’, Waje is one of Africa’s most respected and iconic female musicians. With a vocal range spanning 3 octaves, she is in a league entirely of her own. Her debut album, the eponymously titled W.A.J.E was released on the 1st of May 2013 via a historic live Google+ hangout with fans joining in from around the world, trending globally at no 4 on Twitter. In 2015, she was named one of the top 10 female artistes in Africa by Channel O.
Waje is well known for her electrifying stage presence and resonating performances. She has shared the stage with Grammy award winning jazz acts Bob James and Ray Hargrove, the legendary Wyclef Jean, Keri Hilson, Ragheb ALama and others. She is one of the few acts to have performed for Nigeria at the 2012 Olympics in London. Waje headlines shows regularly across Africa and holds her own concert series ‘Waje Live’ every quarter in cities across Nigeria and Africa.
Waje has received over 20 awards and nominations worldwide including a Channel O Music Award, 4 World Music Award nominations in 2014 alongside Femi Kuti, Katy Perry, Taylor Swift and others. Her Awards include Best Reggae/DanceHall song 2013 (Headies) and Best Female musician 2013 City People Entertainment Awards amongst others.

Cobhams Asuquo is a producer and songwriter who In 2005 was signed on with Sony ATV London as a songwriter. He performed with other renowned Nigerian artists at the World Economic Forum in Davos, Switzerland in 2014. He has arranged music and performed at international music events such as The Harare International Festival of Arts and at the French Cultural Center Concert with Asa and Grammy Award Winner Angelique Kidjo.

Ordinary People is a testament to the latent power in the common man. In this song, Cobhams Asuquo calls everyone to give to the best of their ability in the daily journey of life. This is a message delivered straight from the heart of one who knows; Cobhams was born blind and has achieved all he has by sheer determination.

‘…We are all ordinary people with ordinary desires, demands, strengths, and expectations: but we are all capable of doing extraordinary things…” Cobhams Asuquo.

Waje’s rrelease is accompanied by a Music video for the track titled “Udue” featuring Johnny Drille.
Waje’s album Red Velvet will be officially released across Asia on 15th May, 2020 Exclusively by VerseOne Distribution. Red Velvet is a 10 track Album that takes us through the magical journey that shows off and allows us to appreciate Waje’s vocal ingenuity.
Watch out for Red Velvet AIbum on QQ Music, Kugou, Kuwo, Naver Music, Yandex Music, Xiami Music, UMA, Douyin, TikTok, NetEase, KKBox, Joox, Jiosaavn etc. This Album is distributed exclusively in Asia by VerseOne Distribution.

Cobhams’s release set to release his official video for “Ordinary People” in Asia in the 11th of May, 2020. The official video for Ordinary people will be on all audio and video platforms across Asia including Naver Music, UMA, Tencent, KKBox, Hungama Etc. Cobhams has Joined @verseonedistro ‘s GoAsia project is to project Nigeria’s rich talent and reach out to previously unreached markets such as Asia’s 1.4 billion listeners population. All Content is exclusively distributed by VerseOne Distribution.